Fort Lauderdale is one of the larger cities on Florida’s South Florida’s Gold Coast and is situated about 20 miles north of Miami Beach and about 35 miles south of Palm Beach. The Greater Fort Lauderdale area is a huge area which covers more than 1,200 square miles. Greater Fort Lauderdale has a population of 1.7 million people and includes the communities of Deerfield Beach and Pompano Beach in the north down to the communities of Hollywood and Hallandale Beach in the south. 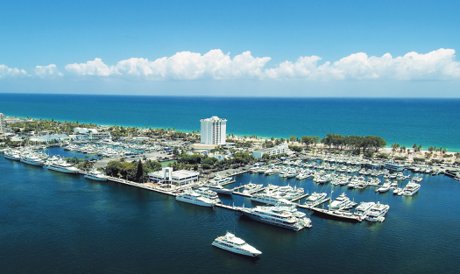 FORT LAUDERDALE IS CONSIDERED THE YACHTING CAPITAL OF THE WORLD

All of those boats means that there is a booming marine industry with many captains and crew from the luxurious mega yachts that are parked at the Bahia Mar Hotel, Hilton Fort Lauderdale and Pier 66 Hotel. Quite a few mega yachts are docked alongside the Las Olas Boulevard and a visit to any of the local restaurants or bars on Las Olas will uncover many of the foreign deck hands that work as crew on these mega yachts.

A stroll down world famous Las Olas Blvd is a magnificent way to take in downtown Fort Lauderdale. Beautiful restaurants, upscale stores, bars and art galleries line both sides of the Boulevard. 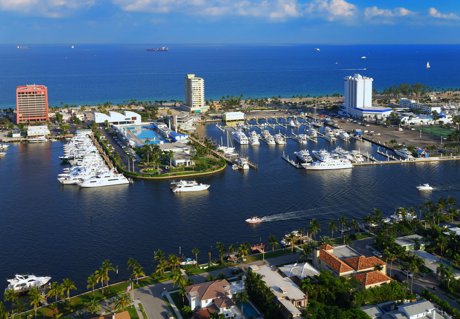 A VIEW OF THE INTRACOASTAL AND THE BAHIA MAR HOTEL

Fort Lauderdale is home to some of the largest mega mansions in the world. Many of these mansions are owned by the rich and famous and have equally huge mega yachts parked alongside their waterfront docks. The world famous “water taxi” takes tourist on a tour of the intracoastal waterway and new river with a running commentary on which celebrity or movie start owns which mega mansion. Indeed some of the wealthiest people in the world own homes in Fort Lauderdale. 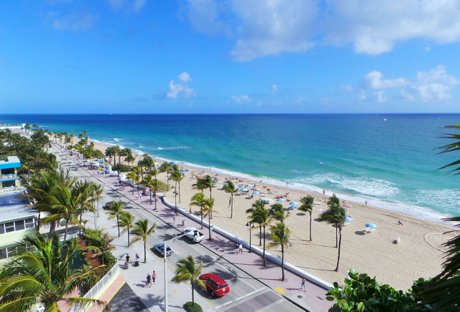 Fort Lauderdale is booming and the Bahia Mar Resort which is home to the Fort Lauderdale Boat Show is about to begin a massive 1 billion dollar renovation. The Strip along the beach on A1A is a popular promenade and a hot spot for tourists and visitors. The strip is lined with upscale restaurants, bars, and luxury hotels.

Port Everglades is one of the busiest cruise terminals in the world and many of the visitors to Fort Lauderdale are cruise passengers that stop off in Fort Lauderdale for a few nights before or after their cruise. If you are looking for golfing, scuba diving, fishing or watersports then Fort Lauderdale will not leave you disappointed.

Come explore the Fort Lauderdale lifestyle. Search for a magnificent home or condo with a view of the ocean or the intracoastal below.

Amazing value for prime downtown living. Renovated and really lovely 1 bed 1 bath apartment literally across the street from the Catholic Church in Victoria Park. Why ren...

CHECK OUT THE INCREDIBLE VIEWS FROM THIS BEAUTIFUL LAS OLAS CONDO! OVERLOOKING MAGNIFICENT LAS OLAS, THE BEAUTIFUL INTRACOASTAL WATERS AND EVEN THE OCEAN. THIS FULLY RENO...

Great opportunity to own in Palm Aire Village. Spacious and cozy three bedroom, one & a half bathroom villa perfect for a first time homebuyer or investor! Open floor pla...

HUD owned property. Case #095-024227. On-line bids must be submitted on hudhomestore through a registered agent. Property sold AS-IS without guarantee or warranty from se...

1BR/1.5BA Unit in convenient location only 5 minutes to the beach or I-95! This attractively renovated and furnished unit features New Stainless Steel appliances and brig...